Government and General Orders. Government House, Sydney, Saturday, February 3d, 1821 … Regulations to Be Observed in the Use of Distilleries in New South Wales and Its Dependencies. Andrew Bent, Government Printer.

Supplement to the Hobart Town Gazette. Saturday, July 28, 1821. Government and General Orders, Government House, Hobart Town, Saturday July 28th, 1821 [listing the names and boundaries of districts as fixed by the Governor in Chief].

While these orders were printed as a regular supplement to the HTG, a larger format version was also printed. Laid paper, two pieces pasted together to make sheet 53.3 x 24.8 cm. An earlier version than Ferguson 874a.

Bent had a major problem with paper supply in 1821. This tiny pamphlet, much smaller than the first and second reports, is printed on thick laid paper, quite yellow in tone. The subscribers’ names were not printed, although a newspaper advertisement on 4 Aug. 1821 suggested they would be.

Reprints a number of pre-existing regulations still in force in 1821.

Ferguson copy in ANL belonged to John Pascoe Fawkner and bears his autograph.

[Primer for children and/or Spelling book]

A small primer for the use of children on their first going to School, will be published in a few days at the Printing Office. Price 2s. to be paid on delivery (the page is missing from Trove)

the following week another advertisement announced:

SPELLING BOOK.-A small Spelling Book for the Use of Children on their first going to School, will be published at the Gazette Office on Wednesday next, Sept. 5th;-Price 2s. To be paid for on Delivery.

Rules to be observed in purchasing Type by a Stranger in the Profession. WERDNA TNEB, Typographist, MDCCCXXI.

Bent’s instructions for William Kermode, commissioned to purchase a new press and type for the Gazette. Marked ‘private’. Printed paper previously used as an envelope on which is written ‘John Raine Esq Merchant Macquarie Point’ and below and to the left ‘A. Bent.’ The printed sheet is stuck onto a larger piece of paper with sealing wax. This paper also appears to be a recycled envelope as on reverse is written ‘Mr. Bell Messrs Bell & Cragg Bishops gate street.’ Several alterations in ink, which extend onto the backing sheet.

Requests that the type be purchased from Mr. Jufroy (Kermode appears to have actually got it from Caslons) and the press from Mr. Arding. Hints that there will be a much bigger order to come. 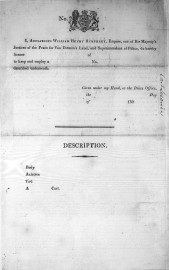