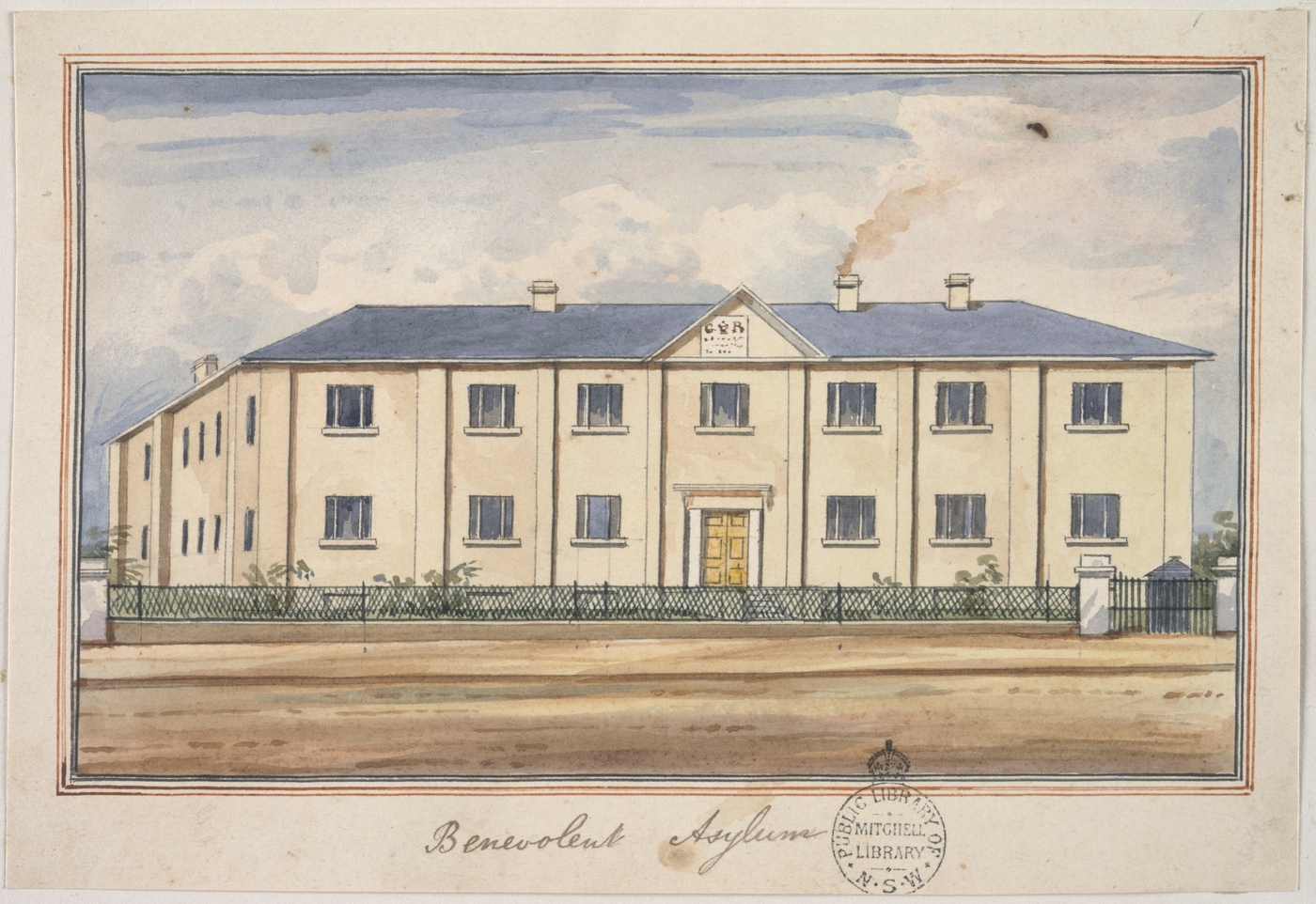 How had it come to this – a pauper’s death in the workhouse?

It is perhaps not generally known that Andrew Bent spent only the last two months of his life in the Sydney Benevolent Asylum. His admission, while the culmination of a gradual descent into poverty, appears to have been triggered by his failing physical and especially mental health, the dispersal of his family and a completely extraneous factor –  the impact of the gold rush.

Andrew Bent experienced what he described as “a sad career of misfortunes” after arriving with his family in Sydney in 1839, ruined in both pocket and reputation, and hoping to make a fresh start. Lack of capital soon compelled him to sell Bent’s News and he had an acrimonious parting of the ways with the conductors of its successor, the Australasian Chronicle, where he had stayed on as printer. A commercial speculation with his son in law Thomas Hall failed and was followed by a string of disasters during a residence in the frontier settlement at Kempsey.

He broke his leg in a fall shortly after arrival, exacerbating a lameness which probably dated from childhood. Most of his late letters are not in his hand, suggesting he also had problems with his eyesight or arthritic hands (both common afflictions of aging compositors) although he still managed to set up the tiny fonts at least two late pamphlets himself.

Back in Sydney, with the 1840s depression starting to bite, Bent limped around the streets in a fruitless quest for work. His wife Mary and the younger children remained at Kempsey. An elaborate but poorly conducted appeal for public charity brought little relief and demonstrated, as did a pathetic, wheedling letter to his old nemesis Arthur, that his wits were beginning to fail him. Devastated by Mary’s death in December 1846, he spiralled further downhill. Aged 55, and with his physical and mental health in decline, he still had a family to support. When Mary died the five youngest boys were aged between 7 and 16.

The older children gradually drifted away from Sydney seeking greener pastures and some developed problems of their own. Mary and her husband John Steele were in Melbourne by 1845, possibly earlier. Andrew Bent junior and family went to Geelong in 1848. Late in 1849 Bent’s oldest daughter Elizabeth sailed to New Zealand and shortly afterwards married surveyor Horatio Nelson Warner in Auckland. They had probably met in Sydney prior to Horatio’s departure for New Zealand in 1840. Bent’s second son Robert, who was still at the Colonial Times in Hobart in 1846, may have returned to Sydney during his mother’s final illness, and then worked as a shepherd on stations at Camden and in the Echuca district. After 1853, with a known tendency towards insanity, he disappears without trace. Hannah remained in Sydney but by 1848, aged only 20, was already suffering from what her father called a “serious affliction,” doubtless the mental illness that caused her confinement in various mental asylums from 1855 until her death in 1892. The only one of Bent’s older children still in Sydney was Catherine although she and her dentist husband Thomas Hall were not in the best of circumstances. Hall had become insolvent during the time he spent with the Bents in Kempsey and was still suffering financial difficulties in 1849. It is also not clear whether Bent and his son in law were still on speaking terms after the Kempsey debacle.

Bent struggled on but everything he touched seemed to go wrong. He made elaborate plans to start a newspaper at Goulburn but had a bitter dispute with his business partner who went ahead solo. Bent cried “piracy!” and printed a scurrilous pamphlet saying he would send it to every newspaper in the southern hemisphere.

Early in 1849 he obtained a licence for and opened a registry office for seamen and servants. That he offered a sideline in money lending was an ominous sign. This project was obviously not a success and later that year his dire financial situation compelled him to sell his precious set of bound newspapers. These were eventually purchased by the VDL Government for the miserable sum of £10. Colonel Arthur had once offered him 50 guineas for a much smaller number of volumes.

His venture into matchmaking was ridiculed in the newspapers and the prospectus for his proposed matrimonial agency suggests that if his marbles were not altogether lost, they were rattling around in his head in rather strange ways. While he may have been suffering from some form of progressive dementia, we cannot discount the effects of long term exposure to printing ink and type, which may well have affected other members of his family also. He became preoccupied with the ancient history of his good friends Bartholomew Broughton and James Austin and wrote garbled letters about their financial affairs – one of them seriously libelous – to the Hobart newspapers.

Perhaps sensing that the end was approaching, on 30 September 1850 he was baptized a Catholic at St. Mary’s church. He gave his age pretty much correctly as 59, and his native place as London. In March 1851 Mr. Andrew Bent and family gave six shillings (which they could probably ill afford) to a subscription for the erection of St. Patrick’s church.

Andrew Bent was admitted to the Sydney Benevolent Asylum on 24 June 1851 and spent the last two months of his life there. Patient records prior to 1852 are scanty and the only evidence of his stay found as yet is in the minutes of the House Committee meetings. Those for 27 June 1851 note his admission. There are no details about his circumstances or who had arranged it. The minutes for 29 August record his death, noting only the date and an age of 55 years, about five years younger than he really was. No cause of death is given.

The Benevolent Society of New South Wales (formed in 1818) opened its Asylum for the Poor, Blind, Aged and Infirm on the corner of what later became Devonshire and Pitt Streets, near today’s Broadway, in 1821. The idle, the dissolute, the vagrant and the wasteful were actively discouraged; residents were subject to strict rules and were expected to work if able to do so. Applicants, who had to be recommended by a subscriber, had their family, economic circumstances and morality investigated by the Visitor of the district in which they resided. Bent certainly would have qualified as poor, aged and infirm.

The addition of a second wing in 1839 did little to ameliorate chronic overcrowding. By the time Bent moved in, under the impact of the depression and the disruption caused by the gold rush, the facility had become “little better than a huge charnel house.” It was “quite impossible to depict … the misery which prevailed from the crowding of masses together within the walls.” With nearly twice as many inmates as it was designed to house, it became “impossible to enforce the regulations which propriety requires, or which are necessary for the preservation of health.”  Conditions improved slightly shortly after Bent’s death when the male inmates (over 200 of them) were moved to Liverpool.

It was probable that Bent’s admission was arranged by his daughter Catherine. The tipping point had probably arrived when her husband, like almost every other able bodied man in Sydney, downed tools and joined the rush to the goldfields. On 10 July – less than 3 weeks after Bent’s admission – Hall’s name appeared on a numerously signed petition from miners at the Summerhill Creek diggings at Ophir, the site of the first big rush, where by June there were between 1500 and 2000 hopeful diggers.

By late October – 2 months after Bent’s death – Thomas Hall had, like many others, moved on to the Turon. A Sydney newspaper noted “Hall the dentist” absentmindedly mixing his damper in the pannikin containing his gold-dust at the Sofala diggings. While Catherine probably remained in Sydney she had five young children to care for, and possibly also responsibility for Hannah. With her husband away, and Bent either unable to look after himself or too difficult to manage she may have had no other option but to arrange for her father’s admission to the overcrowded and miserable Asylum.

The Asylum was conveniently close to the Devonshire Street cemetery where Bent’s beloved wife Mary had been interred five years previously. Bent received a Roman Catholic burial there on 27 August, the register stating that he was from the Asylum, aged 55, a printer by trade and had arrived on the ship Gilmore.  There was probably no headstone. The Halls moved to Tasmania in 1855 and the younger Bent boys drifted away to Braidwood or Victoria. No family remained in Sydney to care for the grave. In 1901, by which time the cemetery was much neglected and overgrown, it was resumed to make way for the development of Central Railway Station. The old Benevolent Asylum building was demolished at the same time. Many remains were exhumed and relocated at that time. Those claimed by relatives were reburied at a number of different cemeteries while the rest were relocated to Bunnerong cemetery, created expressly for the purpose, and later absorbed by Botany Cemetery (now known as Eastern Suburbs Memorial Park). An index of known Devonshire street re-interments exists but does not mention Andrew or Mary Bent, so the precise location of their bones today is uncertain.

The brief death notice from the Sydney Morning Herald was repeated in numerous newspapers throughout the Australian colonies, but there was no other commentary about Bent’s passing, and it appeared that in both New South Wales and Van Diemen’s Land his early importance and long career as printer and newspaper proprietor had been largely forgotten.

His daughter, Elizabeth Warner, in Auckland, had not forgotten. She was 8 years old when her father was imprisoned for libel in 1826 and therefore old enough to remember his achievements and his tribulations very clearly. Either Elizabeth or her husband Horatio must have been the source of the death notice which appeared in the Daily Southern Cross on 23 September 1851 and of the accompanying editorial note.

DIED, At the Benevolent Asylum, Sydney, on the 26th of August, 1851, Mr. Andrew Bent, printer, aged 55 years formerly of Van Diemen’s Land. [Mr. Bent was the father of the Tasmanian Press. The title of his first paper, the Hobart-Town Gazette, was forcibly appropriated to a Government issue by Colonel Arthur, Bent’s journal being then styled the Colonial Times. He was so frequently prosecuted on ex-officio informations that at last they wore the aspect of persecution. But, although a Stamp Act was imposed, and an extraordinary espionage observed, Mr. Bent laboured bravely and zealously for the freedom of the Press, undeterred by the infliction of arbitrary fines and despotic enactments. The Stamp Act was at once disowned and disallowed by the then Secretary for the Colonies, Sir George Murray— Ed. S. C]

Although there is no headstone for Bent in Sydney and no permanent memorial in Hobart, he is commemorated in stone across the ditch in Auckland’s Purewa cemetery where Elizabeth and Horatio are buried with three of their daughters. The inscription on their headstone notes that Elizabeth was the eldest daughter of Andrew Bent, Father of the Tasmanian Press. 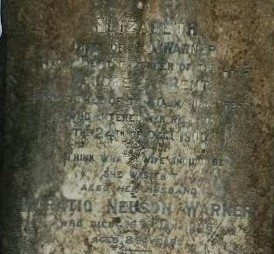 AND ELDEST DAUGHTER OF THE LATE

(FATHER OF THE TASMANIAN PRESS) …