This account of Tasmanian colonial bookbinding, in two parts, examines Andrew Bent’s involvement, but also touches on others who offered bookbinding services either as entrepreneurs or practical binders. Although I include a few photographs, what follows is basically a narrative account rather than a detailed technical description. It is inevitably incomplete. Bent was a printer rather than a bookbinder, although like his contemporary in Hobart, James Ross, he had at times to be a jack of all trades. While he probably picked up a bit of knowledge about bookbinding, the binding work which emanated from his printing office would have been done by his workmen.

Most of Bent’s own monographs were fairly slender pamphlets. The gatherings were held together by a simple stab stitching (as in E. F. Bromley’s Address of 1823). They were frequently, although not always, issued in blue paper covers.

The almanacs, being more substantial, came out in a range of covers using blue, yellow, or marbled paper, sometimes stiffened, and usually with a paper back strip. Some years exhibit more than one binding style, and a few special bindings with interleaved blank pages survive. A more detailed description of some of the almanac bindings can be found in Ian Wilson’s Collecting Old Tasmanian Books and in the Imprints section of this website.

This charming binding of the 1824 Van Diemen’s Land Pocket Almanack was done for solicitor Robert Pitcairn, by an unidentified binder, probably in the latter part of 1824. Pitcairn arrived in Hobart in September of that year. Cream paper covers the boards and marbled paper has been pasted on top, with the corners trimmed to imitate a half binding. Imitation raised bands are marked on the spine. The marbled paper may have come from a  quantity advertised for sale at the premises of Mrs. Birch in 1822.

Binding of annual newspaper volumes – government copies of the Gazette, Bent’s personal file copies of his own and other newspapers and annual volumes bound up for customers – was also an important activity.  Tasmanian collector Crowther, who just happened to drop by the Government Printing Office during a rebinding exercise, salvaged some of these early newspaper bindings and described them in Biblionews (September 1956). They are typically half calf (or possibly kangaroo skin) with boards covered in light blue or, occasionally, marbled paper.

Some volumes use a dark blue paper and have the title stamped in black alongside the spine (example from 1822 shown). A bound volume for 1819 in the Dixson Library, Sydney, is very similar. These may have been the official government set as opposed to Bent’s personal copies, which were added to the Chief Secretary’s newspaper collection in 1849. Other bound newspaper volumes survive elsewhere, although many are in poor condition. Most are similar to the half bound light blue volumes described by Crowther and to the James Kelly volume shown below. Some have blind tool decoration and/or a paper label on the front.

In 1823 Bent received new printing presses and type from England and by the end of that year had moved into a new printing office in Elizabeth Street. As a logical extension to his business, he also imported a ‘complete Set of Book-binder’s Tools and Presses’ and advertised the neat and expeditious performance of ‘book-binding, in all its various branches.’ This equipment was not included in the 1821 requisition for press and types which went to Governor Sorell, so was probably imported entirely on Bent’s own initiative. In 1830, when his printing business was sold, the equipment comprised ‘one large excellent Standing Press, Cutting Presses, Sewing Presses, Plough, Brass Marking Letters, Ornaments, Rolls, and every other Requisite for carrying on the Business to any extent.’

This advertisement indicates the sort of stationery binding undertaken at Bent’s printing office during 1824. Also on offer was ‘The HOBART TOWN GAZETTE, for 1823, neatly bound, and as clean as when they came from the press.’

Government ledgers and other volumes were, of course, being bound well before Bent received his own equipment. From 1818 the government bookbinder was Scottish convict Robert Drysdale who arrived on the Lady Castlereagh in June of that year, aged twenty-two, under a sentence of fourteen years for housebreaking. He was not really Andrew Bent’s own assigned man, but was based at the printing office, working under Bent’s general direction. He probably bound most copies of Bent’s 1824 almanac, although not the one pictured above. Advertisements in 1819 and 1820 indicate that Drysdale also did bookbinding on his own account in his spare time, apparently unimpeded by a lame right arm.

This volume of the Hobart Town Gazette for 1820 which belonged to early Hobart identity James Kelly, was probably bound by Drysdale. It has simple blind-tooled decoration and a printed label pasted onto the front. The convict register shown below is an early example of government binding and may also be Drysdale’s work. 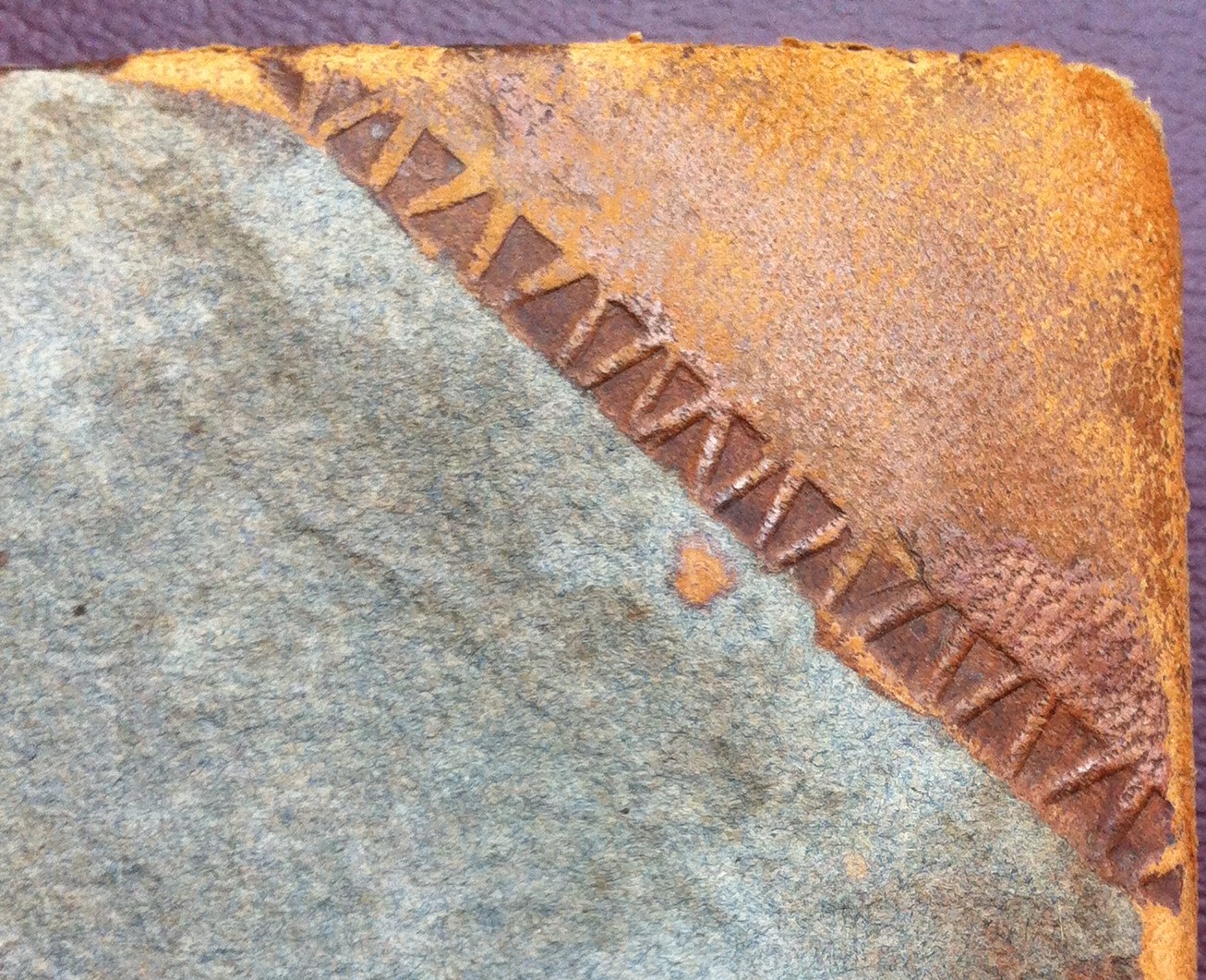 Drysdale was often in trouble. Although acquitted on a charge of neglect of duty, he also, during his association with Bent, spent seven nights in gaol for being absent from his lodgings at night and was flogged for being out after hours. There may well have been increasing friction after Bent’s new binding equipment arrived. In February 1824, after ‘repeated disobedience of orders and insolence to Andrew Bent’, Drysdale was sacked and spent a week in a cell on bread and water.

Drysdale’s short-lived replacement was another housebreaker, this time from Surrey. Philip Caton or Keating (alias John Smith) was twenty-two when he arrived on the Morley in January 1823, transported for life and bearing a very bad character. He had already served seven years on the Retribution hulk for an armed robbery. Part of that sentence overlapped with Bent’s younger brother Benjamin, who served time on the same hulk. Soon after arrival in Hobart Caton was flogged for an assault, and while in Bent’s service was accused of stealing a shirt and of a robbery. He was acquitted on both charges, but the disruption to his work would have irritated Bent exceedingly as around this time he lost the services of two of his compositors after a drunken affray.

Given his criminal history in England young Caton probably lacked experience. Mistakes sometimes occurred. In July 1824 the Printer earnestly requested that ‘always in future’ when work was sent from the public departments it be ‘accompanied by specific Directions, and an official Requisition for the Materials or Books, in writing.’

Caton absconded on 1 September 1824 and eventually made his way back to England. He reappeared in Hobart in 1827, transported (for the third time) under the name of Robert Collins. He had no further association with Bent or bookbinding and after receiving a conditional pardon in 1845, moved with his wife to Port Philip.

Bent immediately advertised for a bookbinder, stressing that he required a ‘sober and steady’ man. It is not known who replaced Caton. Bent continued to advertise his bookbinding services throughout this period, so must have had at least one binder who, presumably, whether bond or free, behaved well. An advertisement early in 1828 testifies to the superiority of his workmen (perhaps suggesting he had more than one) as well as the burgeoning musical life in Hobart Town.

Later in the year Bent was selling marbled paper separately as well as using it for bound cheque books. Marbled paper also appears in the covers of almanacs for 1827 and 1828.

Other bookbinding supplies were available locally. From 1823 bookbinder’s knives or plough knives were occasionally advertised among assorted imported ironmongery; in 1827 John Morrisby advertised that he had commenced the tanning and dressing of leather, including bookbinding leather; and in 1829 the extensive list of goods available at Watchorn’s Wellington stores included strong bookbinders’ paper. The Commissariat also advertised for local tenders for dressed sheepskins for bookbinding, for mill boards and marbled paper.

The large volume shown below is Bent’s own annotated copy of the official Hobart Town Gazette (Ross and Howe) for 1826. The smaller volume (1827) has no indication of provenance, but is bound in a very similar style.

Bent was dismissed from his position of Government Printer in June 1825, but may have continued to do binding work for government for a while thereafter. He was paid for some in 1825.

Given the substantial amount of printing work Bent did for the Wesleyan community in Hobart, it is likely he also did binding and book repairs for the Wesleyan Library,  established in 1827. Some volumes from that library, subsequently part of the Wesleyan Sunday School library, survive in the Crowther Collection at Libraries Tasmania. The two volumes shown here – James Thomson, Theological Discourses on Important Subjects, Doctrinal and Practical (1808-9) – while probably still in the plain bindings as issued by the publisher, have book plates printed by Bent. The 1827 catalogue of the library indicates that Thomson’s Sermons were in its collection at that time.

After spending a couple of trouble free years in the Surveyor General’s office Drysdale returned to his position as government bookbinder, his services being regarded as ‘indispensable’ by the Colonial Secretary, and was granted a ticket of leave. Government Printer James Ross received new printing equipment in 1827 and was obviously offering a bookbinding service in 1828. He published his first almanac, the Hobart Town Almanack, at the beginning of 1829. This was issued in cloth covered boards, a fairly recent innovation even in England. Copies were possibly bound by Drysdale, although Ross may have had more than one bookbinder at this time.

Early in 1830 Bent sold his printing business to Henry Melville who continued to advertise bookbinding. In late 1830 and early 1831 Melville’s assigned bookbinder was the ubiquitous Drysdale who in 1829 had lost his ticket of leave (and with it his position with Ross) for repeated drunkenness. In between frequent stints on the tread wheel, Drysdale probably bound Melville’s first almanac, the 1831 Van Diemen’s Land Almanack,  issued in both a cloth binding and printed paper wrappers.

Part 2 will examine the expansion of book binding activity in Van Diemen’s Land in the eighteen thirties and beyond.